These rules are intended to be as inclusive as possible containing all important tournament information. Tournament organizers ask that you read through all the rules and regulations prior to contacting the staff for questions regarding the tournament.

Raymond Spring Challenge is an Alberta Soccer Sanctioned tournament and will follow the FIFA Laws of the Game.

1. When registering your team you must register in the tier or division that your team is currently registered for the current season.

2. Tournament organizers reserve the right to adjust tiers and groups as needed to provide balanced pools or ensure teams are competitively balanced. Sometimes this may result in combining tiers to create the pools for the tournament.

5. Players are only permitted to play on one team for the tournament.

6. All coaching staff and players (including guest players) must be currently registered with their provincial youth soccer association, recognized and in good standing with Canada Soccer for the current season in order to be eligible to participate in the tournament.

7. Coaches or managers that are suspended by ASA or any other cooperating associations are not allowed in the tournament as a team official. The team is welcome to participate.

1. All registering teams are required to upload their official provincial team roster in their online team profile prior to completing their online tournament roster.

2. All teams are required to register their completed roster and identify any guest player(s) no later than May 8, 2019.

3. No changes to a team’s roster can be made after the team’s first tournament game.

4. Players not on the team roster prior to the team’s first tournament games are deemed ineligible.

5. Players cannot be registered on more than one team roster.

6. Out of Province Teams – Along with their official team roster all out of province teams must submit travel permits from their provincial soccer association listing all the players traveling with the team to the tournament.

1. Each team will be allowed to us a maximum of three (3) guest players for the tournament.

3. A guest player must only replace a registered player of the team that cannot attend the tournament, and cannot increase the team’s roster above the original number of registered players.

4. All guest players must come from the same district association and be properly registered for the current season in order to be eligible to participate in the tournament.

5. The guest player consent form must be completed for each guest player(s) and be signed by the guest player’s current coach as well as a team official from the tentative tournament team.

6. All guest players will need to be identified on the team’s tournament roster/game sheets.

7. The guest player consent form(s) will need to accompany the game sheet when handed to the referee at the start of each game that the guest player participates in.

The length of games will be 2 X 30 minute halves

There is no overtime for any game in the tournament

All round robin games can end in a tie, only games that need a result will go to penalty kicks to decide a winner

Each team will be schedule for three (3) games and medals will be presented after the last games in the group are played The Mercy Rule will be in place for the tournament. No team will be given more than a 5 goal win differential.

Tie-Breaking procedures will use stats AFTER the mercy rule is applied. For example if a team wins 6-0, they will only receive credit for 5-0 regardless of actual score

All referees are ASA certified or equivalent and are assigned by the tournament referee assignor. Their decisions on their interpretations of the Laws of the Game are final

Substitutions are made at the discretion of the referee

Teams are permitted an unlimited number of substitutions during the game.

Teams will be grouped into Pools for the tournament (Pool A, Pool B, Pool C, etc.)

Depending on the number of teams in each group, the Pool Format will be determined as follows:

Three Team Knockout – teams will play a three team round robin, the 2nd and 3rd place team will play-off to determine who plays the first place team for the final game. Gold and Silver medals will be awarded in a three team knockout.

Four Team Round Robin – each team plays three matches (playing each team in the group). Medals are determined from standings after all games have been played. Gold and Silver medals will be awarded to the top two teams in the group.

Five Team Round Robin – each team plays four matches (playing each team in the group). Medals are determined from standings after all games have been played. Gold and Silver medals will be awarded to the top two teams.

Six Team Crossover – each team plays 2 round robin games against the other teams in their group. After all regular matches are finished, 1st of Group 1 plays 1st of Group 2 in Gold and Silver match, 2nd plays 2nd in 3rd/4th place game and 4th place match and 3rd plays 3rd in consolation match.

All round robin games can end in a tie, if teams are tied in points after the round robin please see the tie-breaking rules to determine winner

All Final games need a result, if the games are tied after regulation time then they go straight to penalty kicks to determine a winner. There is no overtime in the tournament.

Official Tournament game sheets will be used throughout the tournament and are available to print off the website. When your team’s registration is at 100% and the schedules have been posted,

Game sheets are to be completely filled out and given to the game official prior to the start of each tournament game.

If there are players not playing in that particular game, but are listed on the game sheet, you are required to cross off their names. The players listed are to be the actual players that participated in that game.

It is the responsibility of the winning team to bring both game sheets immediately after the game to the tournament headquarters.

NOTE: Most goals for cannot apply due to Mercy Rule

If less than 50% of the game has been played then the game will be cancelled and the score set at zero for both teams.

All players, coaching staff, assisting personnel and team supporters are expected to obey the laws of the game and respect all tournament officials.

Foul or abusive language towards players, coaches, referees and tournament staff/volunteers will not be tolerated. Failure to comply may result in expulsion from the tournament. The team is responsible for the behavior of its players, coaches and spectators.

Any player receiving a red or two yellow cards in a single game will be suspended for the remainder of the game and will serve an automatic 1 game suspension. Any player that receives a second red card in the tournament, the player and coach must report to tournament headquarters immediately following the team’s game. The player will not be permitted to participate in any further tournament games and the offenses may be reported to their association for further disciplinary action

It is the coach’s responsibility to ensure that their players serve their discipline during the tournament.

Players serving red card game suspension must immediately leave the area of play and are not permitted on the team bench during the game they are serving the suspension.

Any team official being ejected from a tournament game by the referee will be suspended for their next tournament game and will not be allowed on the bench or the area of play while serving the suspension.

Players serving suspensions from red cards in league play prior to the tournament will need to contact tournament organizers to determine eligibility to participate in the tournament.

Any coach serving a suspension from their associating league will not be allowed on the bench as a team official for the tournament. The team is welcome to attend.

Section 6 – Rules for Kicks from the Penalty Mark

A few reminders for coaches/parents regarding this procedure:

Coaches and players not taking part in the penalty kicks must remain in their technical areas.

The goal used for the penalty kicks will be chosen by the referee.

All parents, fans must remain on the touch line. No one is to be behind the goal line.

Before the start of kicks from the penalty mark, teams shall be required to equalize the number of players on each team e.g. if one team has 14 players and the other team has 16 players, the team with 16 players must reduce their team size by 2 players. These 2 players will be outside the technical area during the duration of the penalty kicks.

The referee tosses a coin and the team whose captain wins the toss decides if they will kick first or second.

The referee keeps a record of the kicks being taken.

Subject to the conditions explained below, both teams take five kicks.

The kicks are taken alternately by the teams.

If, before both teams have taken five kicks, one has scored more goals than the other could score, even if it were to complete its five kicks, no more kicks are taken.

If, after both teams have taken five kicks, both have scored the same number of goals, or have not scored any goals, kicks continue to be taken in the same order until one team has scored a goal more than the other from the same number of kicks.

Each kick is taken by a different player and all eligible players must take a kick before any player can take a second kick.

All players, except the player taking the kick and the two goalkeepers, must remain within the center field area.

The goalkeeper who is the team-mate of the kicker must remain on the field of play, beside the corner mark on the side of the field where the kicks are being taken.

The ASA Rules of Outdoor Soccer apply when penalty shots are being taken. 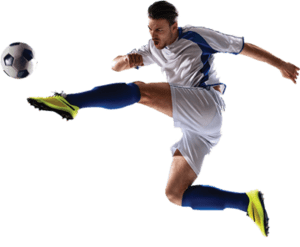